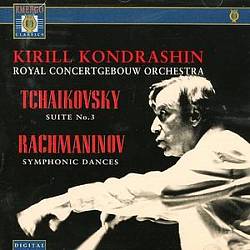 Electrifying performances of Tchaikovsky’s Third Suite and Rachmaninoff’s final opus, miraculously captured by the Dutch Radio (NOS) and preserved for posterity by Emergo Classics in this hard to find 1994 release. Russian maestro Kirill Kondrashin (1914-1981) proves these often belittled scores are mind-blowing trips from start to end. Tchaikovsky’s rarely programmed Third Suite was only recently introduced for a concert at the Paris Salle Pleyel as “not very good Tchaikovsky”. Granted, it wasn’t particularly convincing what the Orchestre de Paris had to offer on that occasion, but Kondrashin shows one shouldn’t always blame the lack of inspiration on the composer. Both performances recorded in 1974 and 1976 are carried by a Royal Concertgebouw Orchestra on fire.