Sir John Eliot Gardiner and the London Symphony Orchestra visited Antwerp with a splendid programme of German early Romantic music. They captured the exalted homages from Weber and Schumann to the Germany of olden times in vivid and dramatic readings that made a good case – barring some rough edges – for traditional orchestras adopting period-style influences. Eventually it was a stellar performance of Beethoven’s Violin Concerto in D major by Isabelle Faust that made the evening really memorable.

Read the full review on Bachtrack.

This year’s composer mini-festival from Bernard Haitink and the Chamber Orchestra of Europe (COE) in Amsterdam’s Concertgebouw focused on Robert Schumann. In three concerts the Dutch maestro conducted Schumann’s four Symphonies and the Overture “Manfred”, as well as his Violin, Cello and Piano Concertos. I attended two of the evenings, leaving quite convinced that some conductors are definitely like great wines – they get better with age – and Haitink (86), who recently received the Lifetime Achievement Award from the Gramophone Magazine, clearly wears that quality label. Distinguished soloists joined him for the concertos – on the evenings I saw, Gautier Capuçon for the Cello concerto and Murray Perahia for the Piano concerto. The harvest just doesn’t get any better than that.

In the Indian Summer of his long career Haitink has been rethinking his readings of the great symphonic repertoire. When you listen to his Schumann Symphonies traversal with the Royal Concertgebouw from some three decades ago there is no doubt this composer has also received a significant revamp in Haitink’s mind. The orchestral forces are now much smaller of course, but this Schumann new-style sounds utterly vivid, light and colorful, skillfully balancing energy with melodic eloquence. And far from mellowing with age, Haitink’s Schumann has become edgier, riskier and often dramatically more intense. The period-performance movement evidently has left its mark and while the characteristic Haitink qualities are still in place – like this unerring sense of musical structure, the spot-on gravitas, and warm sonority – the overall blend is more compelling than ever. Schumann himself appears as more complex and less predictable, more human in fact. The often heard criticism of clumsy orchestration is once again proven unjustified.

In the COE Haitink has found the ideal partner to bring these new insights to life. Orchestra and conductor worked together for years and it’s very obvious why Haitink called the ensemble “the greatest gift in the later stages of my career”. The evident chemistry between them was crystal-clear in these Amsterdam concerts by the responsiveness, alacrity and joy of the musicians. The maximum impact was achieved with the slightest of means. Haitink conducted everything with the score, always attentive to details and keeping everything under control with the smallest of motions.

It was great to hear how the individuality of each of the symphonies was characterized sonically, but also by a keen understanding of their internal logic. From the unbridled enthusiasm expressed in the First and also the Fourth Symphony (the latter performed in its 1851 reworking) with their transparent and limpid sound, to the struggling mood of the Second, brimming with excitement but also darkened by threatening intrusions. It made me regret I wasn’t able to hear them perform the “Rhenish”.

The orchestral balance was impeccable, but also slightly different, quite logically, from piece to piece. The antiphonally placed strings were a constant joy (perhaps nowhere more so than in the multilayered canvas of the Larghetto of the First Symphony and the hard-driven Allegro molto vivace of the Second). The woodwinds, first oboe and first clarinet especially, were no less impressive. The horns were fine, too, but I felt somewhat underwhelmed by the remainder of the brass sections, not always that focused or powerful. Timpanist John Chimes was however ever-reliable and clearly had his moment of glory in the Second Symphony.

Both the First and Fourth Symphonies were given superb readings, yet it was the Second which left the strongest impression. After a slightly hesitant introduction, Haitink unleashed the symphony with a passionate urgency virtually spanning the whole work in one single breath and leading towards an exhilarating, triumphant finale. Tempos were swifter than notated, the beautiful Adagio espressivo was fluent, but in effect this was one of the most convincing performances of a Schumann symphony I have heard recently: it had all the characteristics of the new manner, vivacious and transparent, but unlike most it retained its old-style grandeur and impact. The Haitink magic at its best.

Both soloists in the concertos were entirely on the same track with Haitink. Schumann’s Cello concerto is not an easy work to tackle in concert, parts of it are densely string-scored, yet French cellist Gautier Capuçon made a very strong case for it. All tonal refinement and unforced eloquence, Capuçon was even more remarkable by blending naturally within the orchestra, yet at the same time leaving no doubt he was the prime voice. Starting as if in an improvisatory manner, he captured the contrasting moods of Schumann’s inspiration – now determined then delicate – with exquisite taste and sensitivity.

Haitink also created a strong bond with pianist Murray Perahia throughout the years and seeing them together again at this stage of their careers was a moving experience indeed. Both musicians seem to feel each other instinctively and a more unified sense of purpose on a concert podium would be hard to find. Interestingly, Perahia (68) hasn’t softened with age either and the disarming naturalness of his earlier performances, including this concerto, has in places become more agitated and volatile, which frankly I don’t mind at all in Schumann. Especially when Perahia’s distinctive luminous, warm and silky tone and his crystalline articulation remain undiminished, and just as much in the fast passages as in the more meditative ones. The Piano concerto is one of Schumann’s most popular works but with artists of the caliber it continues to surprise.

The final evening featuring the Piano concerto and the C Major Symphony, opened with a fiercely dramatic account of the Overture “Manfred” and was dedicated to the victims of the terrorist attacks in Paris two days earlier. Orchestra leader Lorenza Borrani appropriately asked for a moment of silence at the beginning of the concert, but it was just as much the message of hope and strength that Haitink and the COE revealed with Schumann’s music that sent us home in a positive mood.

For Bernard Haitink this Schumann run was also a major personal triumph. The concerts were received with long standing ovations. He is Amsterdam’s local hero of course, but he deserves every bit of it. This was glorious music-making from a grand old master. Long may he continue.

It was a packed and enthusiastic Centre for Fine Arts that greeted Sir Antonio Pappano, leading his Roman Orchestra della Santa Cecilia. Their visit guaranteed a notable Italian presence but of course music lovers in Brussels also fondly remember the glory days of the Monnaie Opera when Pappano headed it for some ten years before moving to London’s Royal Opera House in 2002. As it turned out, however, this evening it was Dutch violinist Janine Jansen who quickly became the focal point, delivering the most remarkable performance in an otherwise unremarkable concert.
Read the full review on Classical Net 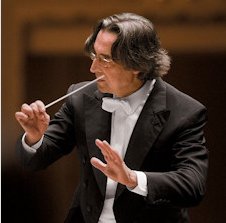 The Chicago Symphony Orchestra (CSO) under their Music Director Riccardo Muti finished two magnificent concerts at the Salle Pleyel in Paris. Part of a European tour that took the orchestra from Poland to Austria, by way of Luxemburg, Switzerland and France, these Paris concerts were easily some of the most rewarding classical music acts I attended this year. The choice of repertoire was agreeable, but it was the outstanding quality of the CSO as well as Muti’s vision which caused most satisfaction.
Read the full review on Classical Net

Last May, following the example of many top orchestras, the Berlin Philharmonic launched its own record label, Berliner Philharmoniker Recordings. The twilight of the great recording labels has moved into another phase. The former flagship of Deutsche Grammophon and of EMI is going to market its discs itself. The inaugural release of Berliner Philharmoniker Recordings is a splendidly packaged Robert Schumann Symphonies cycle conducted by Simon Rattle, recorded during concerts throughout 2013. The Berliner wouldn’t be the Berliner if the presentation wasn’t extra special. In the form of a landscape-sized linen-bound book with quality paper decorated with motifs from the posh Berlin porcelain factory, this Schumann box not only contains two CDs, but also a Blu-ray disc offering the concerts in Pure Audio 24-bit/96 kHz (2.0 LPCM Stereo or 5.0 DTS-HD MA) and in High Definition Video (Full HD 16:9/PCM Stereo or 5.0 Surround DTS-HD). Moreover included are a download code for high resolution audio files of the entire album (in 24 bit/up to 192 kHz) and a 7-day ticket for the Digital Concert Hall, Berlin Philharmonic’s video streaming service. This is sheer audiophile heaven.
Read the full review on Classical Net

Venues undoubtedly play a role in the success of a concert (and what can top the magnificent Grand Hall of the Vienna Musikverein with its fabulous acoustics?), but so do conductors. A few seasons ago I caught the Vienna Symphony Orchestra in a concert in Cologne, where the overall impression was one of deadening indifference. Now, performing in the Austrian capital at the Musikverein under their soon-to-be chief conductor Philippe Jordan, this was like a totally different ensemble, boasting plenty of character and great potential indeed.
Read the full review on Classical Net 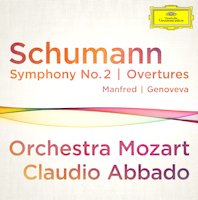 In the autumn of his career Claudio Abbado turns to Robert Schumann’s Second Symphony. Interestingly, this is a first for the 80-year old Italian maestro in spite of his profuse recorded legacy. Although he focused on Schumann repeatedly (the Piano and Cello Concerto, as well as lesser-known pages like the Scenes from Goethe’s Faust and the complete incidental music to Manfred), until now he never committed any of the Symphonies to disc.
Read the full review on Classical Net

The Georgian violinist Lisa Batiashvili teams up for her second Deutsche Grammophon disc with the Staatskapelle Dresden and its principal conductor Christian Thielemann in this new recording of the Brahms Violin Concerto. The 33-year-old Batiashvili has quickly established herself as one of the most acclaimed and sought-after violinists of the day. She holds the position of “Capell-Virtuosin” in Dresden for the 2012/13 season, emphasizing her special relationship with the reputed orchestra and while falling short of being revelatory, her Brahms nonetheless makes a fine stand among the many reference recordings available.
Read the full review on Classical Net

The Danish National Symphony Orchestra was founded in 1925 as the national radio orchestra in conjunction with the Danish Broadcasting Corporation. Two legendary conductors played a key role in its formative years, the German Fritz Busch and the Russian Nikolai Malko. Over the years the orchestra has been working with several of the most acclaimed chefs, as well as composers as varied as Stravinsky, Prokofieff, Hindemith, Boulez and Henze when they came to premiere their work in Denmark. The Danish maestro Thomas Dausgaard acted as its principal conductor between 2004 and 2011 and while succeeded by Rafael Frühbeck de Burgos in September 2012, Dausgaard remains the orchestra’s honorary conductor. Touring from Copenhagen to Germany, they brought to Aachen a program with works by Robert Schumann, Edvard Grieg and Richard Strauss.
Read the full review on Classical Net