Performing ballet music on disc is vastly underestimated. Perhaps it’s linked to a dismissive attitude from many musicians towards the ballet genre – it’s not really “profound” music, is it, so how hard can it be? Yet some recent abysmal recordings of Tchaikovsky’s Swan Lake made me grab in despair at this old (1961) disc from Anatole Fistoulari with the Concertgebouw Orchestra. Re-listening to it is a vivid reminder of how much is overlooked and lost by not taking the music serious or without a careful analysis of its mechanics. Ukrainian conductor Anatole Fistoulari (1907-1995) may be virtually forgotten today – even if he made most of his career in the West, having fled the delights of communist Russia, and became the son-in-law of Gustav Mahler – but he surely knew his ballet music.

Fistoulari breathes life in every bar of the score, naturally blending the symphonic character of Tchaikovsky’s music with the theatrical requirements: the result is one of the most dramatic accounts of Swan Lake you’ll ever find on disc – Evgeny Svetlanov excepted. Pushing the orchestra to the limit, juggling with a complex array of phrasing and rubato, scenes (even only fragmented as here) are bustling with emotion and presence, dance moments shivering with elegance and zest. Just listen to the suspense he creates in the opening of Act 2, preceding the first encounter of Siegfried and Odette (not for nothing the dramatic core of the story), or the subtle details in the Dance of the Swans at the beginning of the last Act. Here is a conductor groomed in the ballet world and while he is not conducting a performance, there is still the feeling that everything is exactly in the right place. You wonder whether discs like this are ever listened to before embarking on a new recording.

For the petite histoire, the cello solo in the pas d’action is played by this prince of cellists, the legendary Tibor de Machula. Recruited by Wilhelm Furtwängler for the Berlin Philharmonic, Hungarian de Machula left Germany after the Second World War for Amsterdam’s Concertgebouw, where he reigned supreme as one of the most respected musicians for three decades. 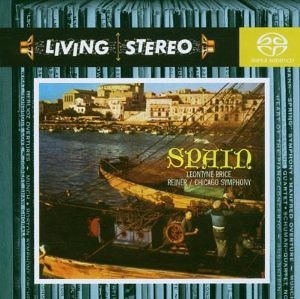 True, the odds couldn’t have been bigger: Fritz Reiner, the icy disciplinarian from Hungary, venturing with the Chicago Symphony Orchestra into sunny and unbridledly passionate Spain. Yet, Reiner’s sense of clarity, orchestral balance and rhythmic vitality, the virtuosic brilliance and polish of the Chicago, Leontyne Price’s gripping dark-throated vocals (all accurately rendered by the spectacular RCA Living Stereo sonics from 1963), transform De Falla’s ballet “El amor brujo” into a hard-to-top exploration of Iberian desire, color and atmosphere.

The regrettably short survey of “The Three-Cornered Hat”, recorded in 1958, including the irresistibly lilting final dance, boasts the same qualities. Two excerpts from De Falla’s opera “La Vida breve”, the interlude and the well-known dance, are also played with tremendous zest and brilliance. The remainder of the program from 1958 consists of orchestral transcriptions by Enrique Arbós of three fragments from Isaac Albeniz’ “Iberia”. The Intermezzo from Enrique Granados’ “Goyescas” is offered as a final bonus.

These vintage RCA Living Stereo three-track recordings from 1958 and 1963 have never sounded better in their SACD format. The re-release of the Living Stereo discs on SACD has sadly been discontinued, which is little surprising when for the majority mp3 is considered the standard. Get it while it’s still available.

Electrifying performances of Tchaikovsky’s Third Suite and Rachmaninoff’s final opus, miraculously captured by the Dutch Radio (NOS) and preserved for posterity by Emergo Classics in this hard to find 1994 release. Russian maestro Kirill Kondrashin (1914-1981) proves these often belittled scores are mind-blowing trips from start to end. Tchaikovsky’s rarely programmed Third Suite was only recently introduced for a concert at the Paris Salle Pleyel as “not very good Tchaikovsky”. Granted, it wasn’t particularly convincing what the Orchestre de Paris had to offer on that occasion, but Kondrashin shows one shouldn’t always blame the lack of inspiration on the composer. Both performances recorded in 1974 and 1976 are carried by a Royal Concertgebouw Orchestra on fire.